Figuring out the Future of Work is an informational booklet that guides people through the process of job automation through more digestible bits.

Problem Discovery
‍As our world transitions into a phase where there is a greater dependency on artificial intelligence (AI) automation, various new forms of occupation are now “at-risk” of being disrupted. While this is happening, many people are unaware of the situation as well as how to prepare for this transition due to the lack of accessibility to information, resources, and support.

Much of my interest in this topic comes from originally having taken a course called 'In the Works' as well as writing a research contribution paper on this problem. The topic of automation is also being heightened and talked about all over the world and media, making it a huge and complex problem space.

I also had to frame my thinking in a way that would allow for the possibility of more tangible, small-scale design interventions as I knew there is not much I could propose as a design solution on the global scale. Here are some examples of the resource and data that I used as a way to further define and explore the problem space of automation's impact on working-class jobs

At the moment, there are lots of information, resources, and data that give knowledge about automation and how it may affect certain working groups, but there are barriers such as accessibility issues as well as the amount of complicated information that needs to be sifted are gaps that deeply affect the specific demographic of people I was looking at. In the end, I decided to ultimately focus on the flow of information as a potential solution, and here is how I reframed and better defined the boundaries of the problem.

If the problem of automation replacing working-class jobs is approached as a problem that lacks accessibility to information, resources, and support for those who are likely to be impacted, then…

User Research
‍After better defining the problem as well as how I would approach and tackle the topic, I began creating a stakeholder map to understand areas of impact as well as the relationships and stakeholders relevant to my topic. 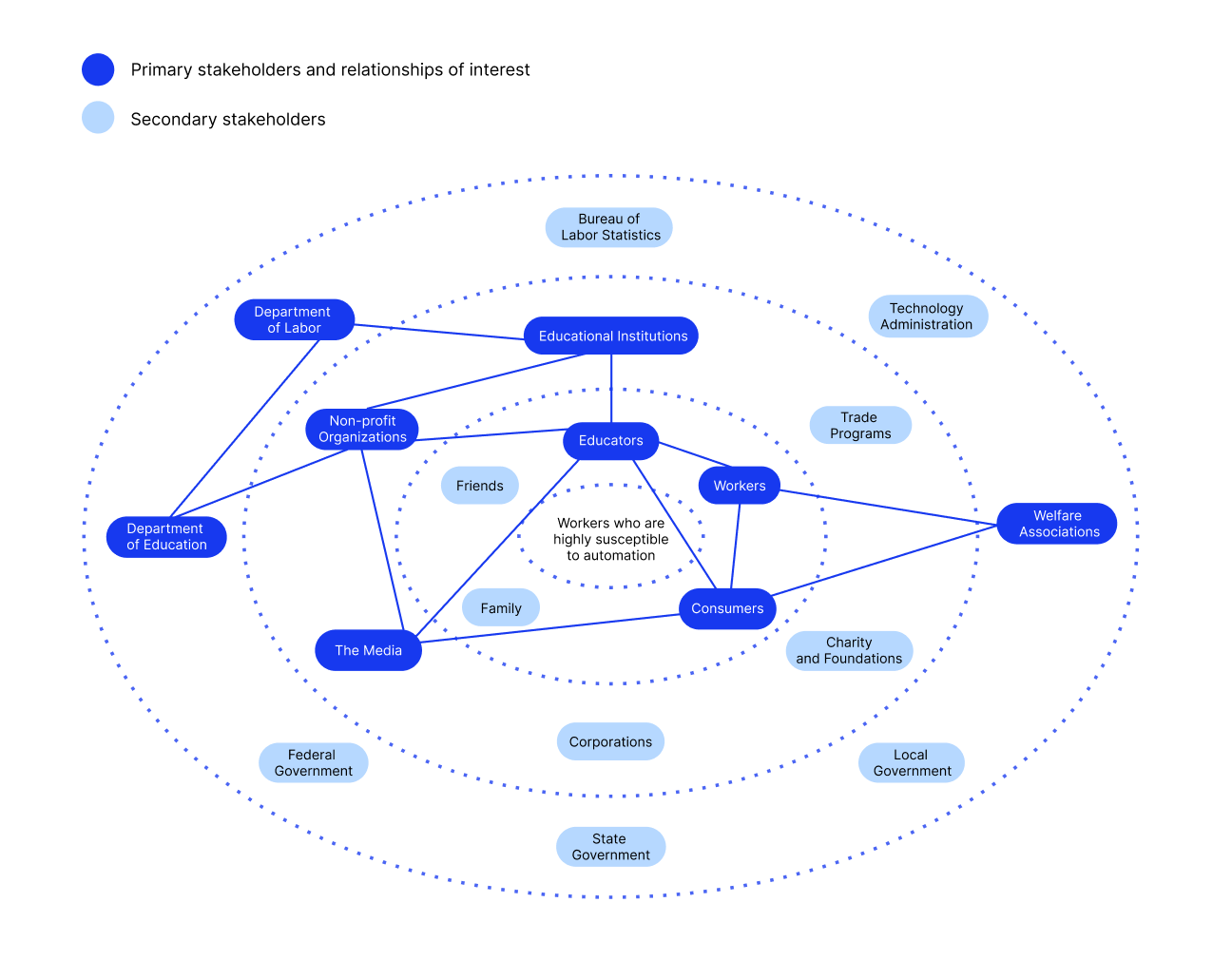 From this, I decided to use methods of surveying and interviewing with our primary stakeholders, and in the end, I received 40 survey responses and conducted 4 interviews with people with varying occupational positions and financial responsibilities.

Because many of the participants in the research were involved in working-class occupations that relied heavily on these jobs as their primary income, we were able to notice many trending and similar concerns and answers being brought up. Here are some of them.

1. How can machine and technology help complement my tasks rather than completely substituting it?
2. I only work these type of jobs because it is the only work that I am able to do with my current skill and education level.
3. I feel like I am not concerned and as aware as I should be. I did not think that I would be as directly affected by automation.
4. There are some training programs available, but they do not feel real, valuable, or accessible to use.
5. I don't have the time or resources to be learning about this on a limited and tight schedule.

In the end, since the conclusion of my research lead to many similar insights, concerns, and needs, I was able to use that to create one main persona to encompass the pain points that I was hearing from the users.

Ideation
‍Based on my research through both primary and secondary sources, I settled on these three main areas of concerns and directions for what the design intervention for this problem space would be targeting to resolve. 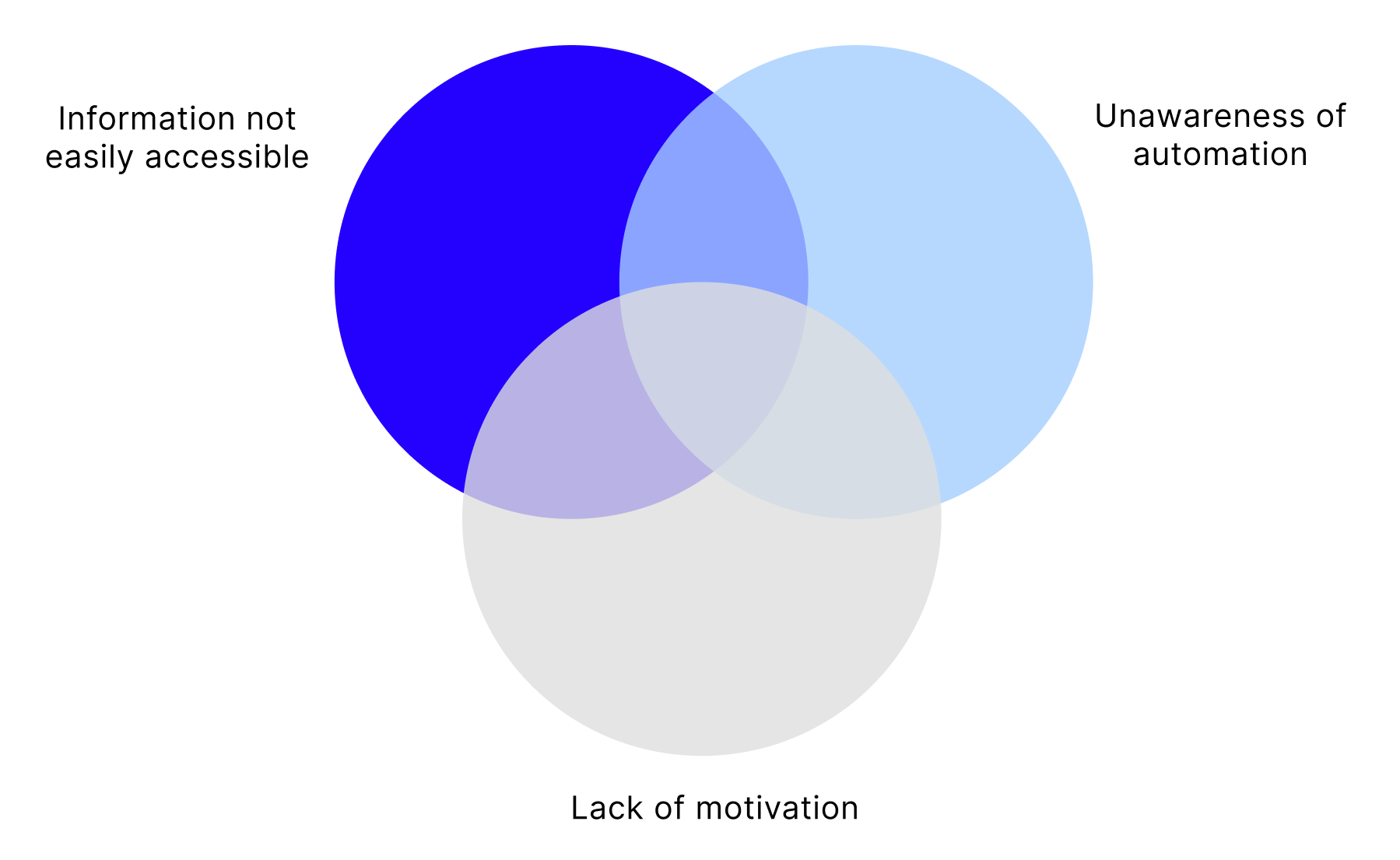 Initially, I was thinking about potential solutions that either targeted policy to close the gap between employees and employers or have a digital platform as a way to spread and act as a central resource hub for finding related information, topics, and resources. In the end, I knew that for the stakeholders that I was looking at, problems of accessibility was still a real issue, which led to the decision of a booklet that is available in both print and digital formats. 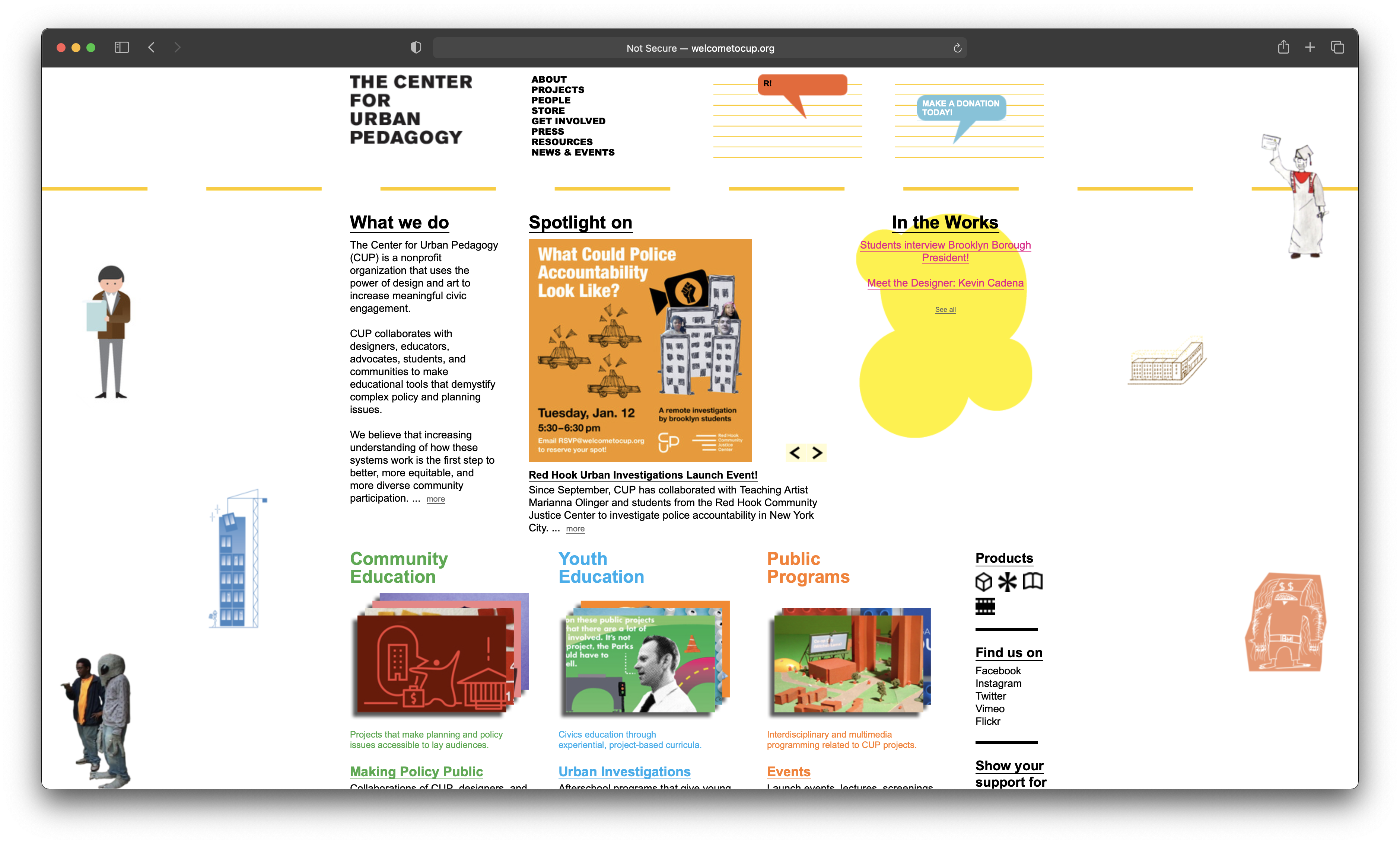 Beginning to look at existing organizations and resources that had the same goal as the booklet that I was trying to produce, I came along 'The Center for Urban Pedgagogy' (CUP), a nonprofit that uses the power of design and art to increase meaningful engagement. This felt like the perfect platform to get inspiration for how my booklet would be designed, organized, and presented.

Here are some cover inspirations from some posters and booklets (thanks to the creators!) In many of these examples, I noticed that visual language was heavily influenced by the content, which was something I kept in consideration as I thought about my booklet.

Looking at the cover examples was especially helpful in noticing details that made the front both interesting yet informative. After, I began to look at the spreads to see how the hierarchy of text is composed throughout the pages as well as how important information is carefully laid out.

A design style guide was also created as a way to bring cohesion throughout the booklet where I finalized the typeface, colors, visual assets, and iconography to build up a working design system. The assets were also generated using basic vector shapes that could be easily adaptable and used for various different scenarios throughout the booklet. 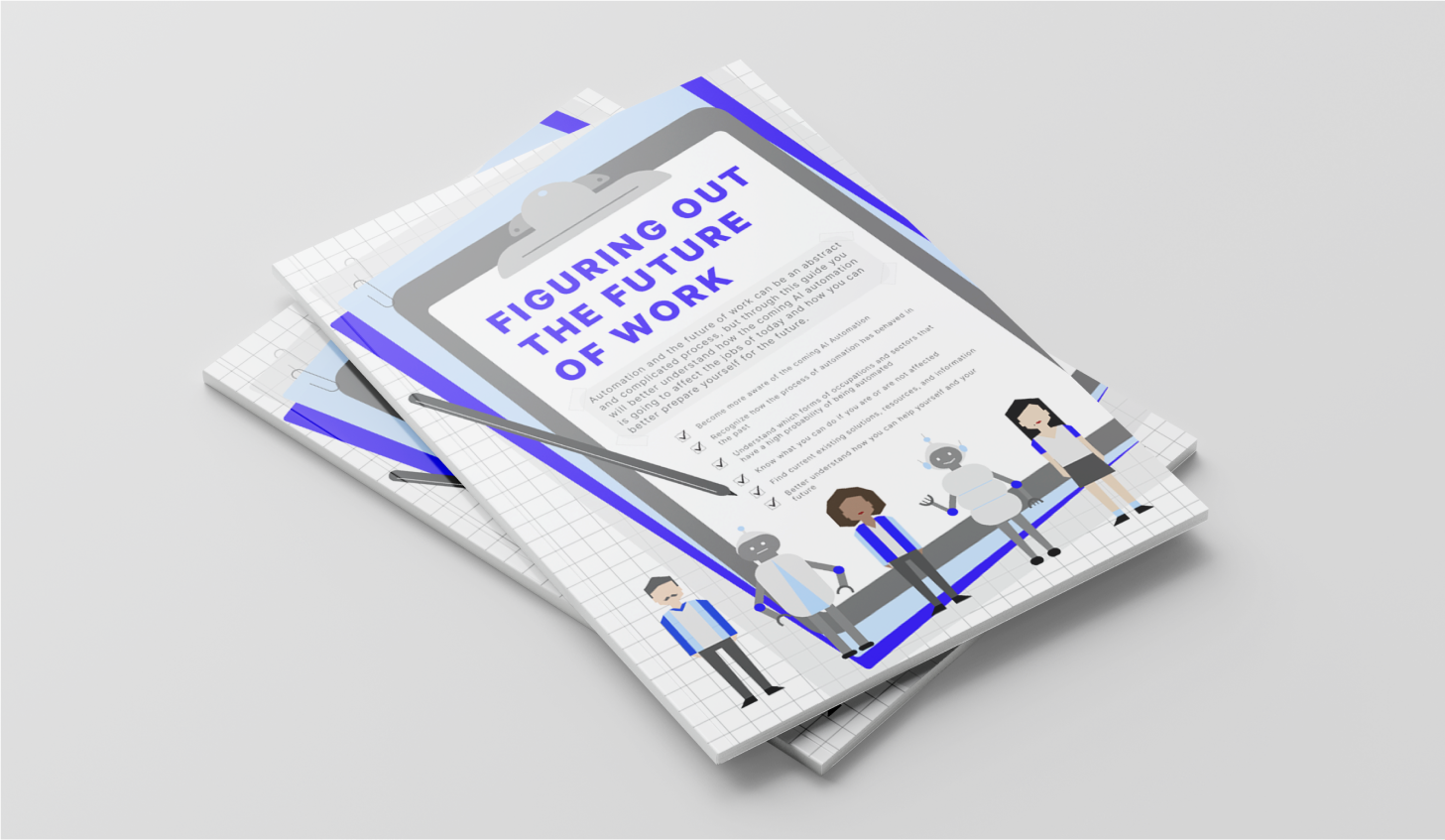 While the design of the book was heavily important, there was a greater level of consideration put in the accumulation and writing of information and data that was going to be in the book. Through the use of both primary and secondary sources that were carefully analyzed, found, and curated, these were used to help fill the majority of the content through the book. (sourcing and credit of the information can be found on the back page of the book)

At the moment, I am thinking that the distribution of the book would mostly be in the printed physical form, but digital formats are also accessible. Also, open-source methods would be used to distribute the book potentially through non-profits like 'The Centre for Urban Pedagogy' to various different demographics and channels like work sectors that are more susceptible to automation, educational and governmental institutions, and magazine and social media outlets. 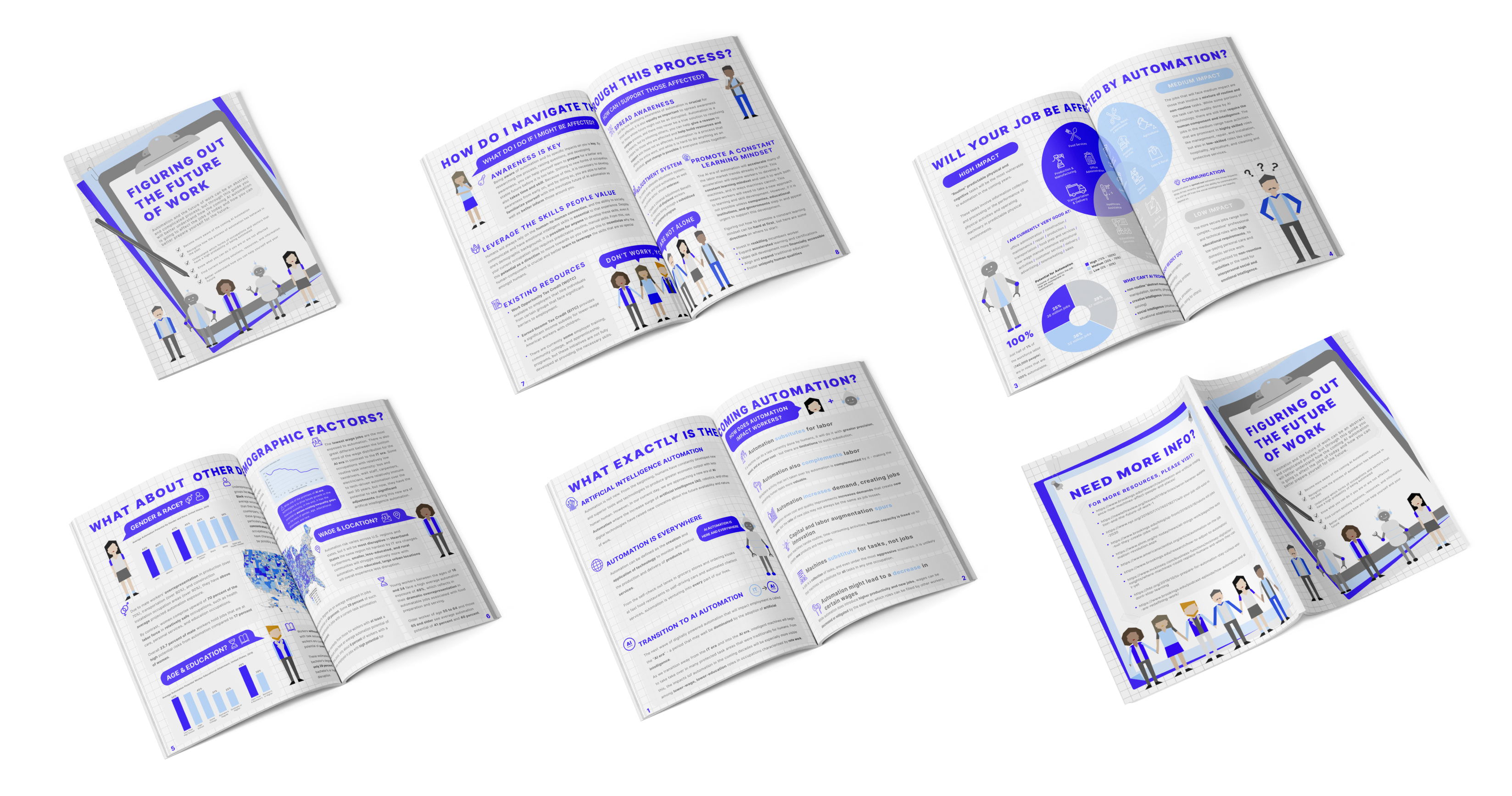 Reflection and Next Steps
‍Overall, not only was this project a way to practice communication design through information hierarchy, design systems, graphics and visual treatment, but it also allowed me to understand how difficult it is to write and incorporate dense text, language, and data in a way that is both appropriate and accessibe. I feel quite glad that I was able to further explore this topic of interest in the context of design research and social innovation.

1. As for the next steps, I am hoping to also translate the print content onto a digital platform as that would allow the adjustment of new information to be more flexibly done, which is crucial as automation is a constantly changing topic.
2. Extending the informational guide to be more detailed on each specific topic and providing more sections than what current exists would also be something I would like to continue working on.
3. In the end, after talking with my mentor, Arthi Krishnaswami, there seems to be huge potential to update and refine both the content and visual system of this booklet to be published as a resource to 'The Center for Urban Pedgagoy'!

Click me to jump back to the top ↑‍